As a seasoned music producer, you will almost certainly be very familiar with the concept of reverb, which is an effect applied to dry audio signals to make them sound like they're positioned within a physical space.

You may be less familiar with a subset of the effect called 'convolution reverb' - in this method, an input audio signal is multiplied with a separate recording taken in a physical space, referred to as an 'impulse response' or IR. The end result is a signal that contains elements of both the input and IR.

This creates a very natural, realistic reverb effect; however, this isn't the only application of convolution reverb, as we shall soon discover! 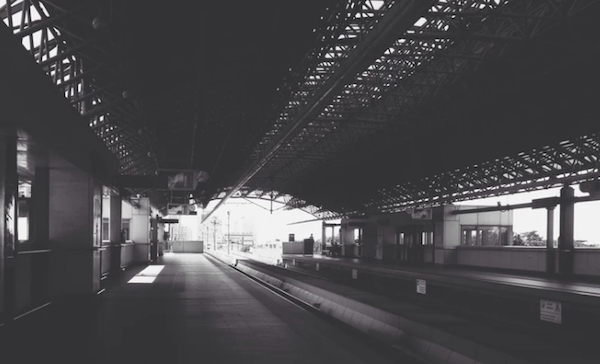 In this music production tutorial, we'll explore some other interesting applications of convolution reverb using less than typical impulse responses.

We'll be using Fruity Convolver from the FL Studio DAW to demonstrate these ideas, but please keep in mind that the following techniques will work with any other convolution reverb plugin that allows you to load your own impulse responses, such as Logic Pro's Space Designer. Let's get started!

When we're not limited to using the impulse responses of physical spaces, we can get creative and begin to experiment. One particularly interesting type of sound to use as an impulse response is filtered white noise.

In this technique, white noise is sent through band-pass filters that have their resonant frequencies centered on the harmonics of a chord. Varying the bandwidth allows more or less noise through at those frequencies, giving us control over the effect.

When we convolve audio from soft synths and drum loops with this special type of filtered noise, the results can be unexpected and dramatically different from the input.

To demonstrate, we're going to need to prepare some filtered noise. Fruity Convolver allows for basic audio editing and can also serve as a linear phase EQ, though again, you can use the native plugins of any other DAW to achieve the following. 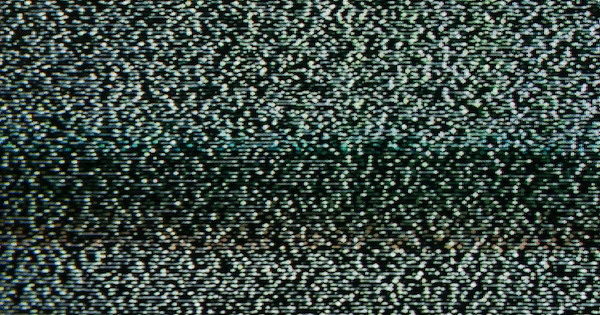 Fruity Convolver can generate its own noise, so for this example I simply used the "Generate noise" command under Tools. If your convolver plugin doesn't have this option, simply import a short sample of white noise.

Next, we need to edit the volume envelope to customise the attack and decay times. Shorter clips seem to work well, so we'll shoot for roughly 200 to 400ms total.

Once I trimmed off the silence on the right side, we're left with a nice clean piece of white noise that we can now apply our band-pass filters to. This one ended up being 382 ms long in total. Here's how this sounds: 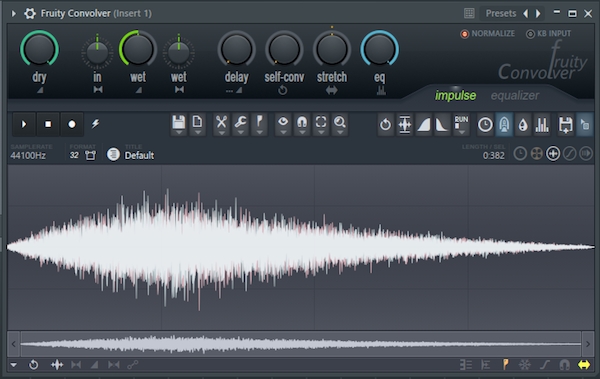 Next, we need to choose a chord and add band-pass filters centered on the harmonics of that chord. We can do this in Fruity Convolver, too. I chose Dm7, which contains the notes D, F, A, and C.

The linear phase EQ in Convolver has an option to filter out 'unharmonics'. However, we can only do this for one note at a time - first, we need to tell Convolver what the fundamental frequency is by specifying a note of the chord.

This setting is accessible by right-clicking the sample rate above the waveform window to open the 'Sample properties' option - 'Middle note' is the note that gets its unharmonics filtered out. Everything below that is also filtered out. 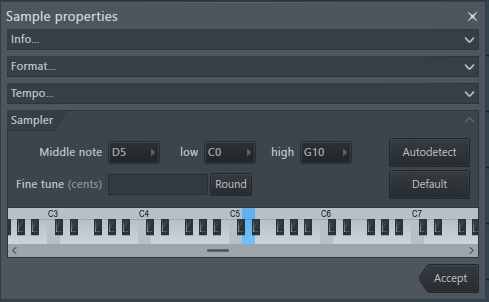 I applied this filtering process to four separate copies of the original white noise sample, one for each note in the chord, and then combined them into one audio sample. Finally, I loaded this sample, which contains harmonics of all 4 notes in the chord, into Fruity Convolver as the impulse response. This is the result:

Another option is to run the white noise sample through a separate filter plugin that contains a multi-bandpass mode, allowing you to set up the notes of the chord in one go.

Now we have our impulse response ready to go, we can experiment with sending different sounds through Fruity Convolver.

Let's try a synth sound initially - I loaded up the FLEX synth in FL Studio, and routed its output into Fruity Convolver. Next, I laid down some broken chords in the Piano roll and had a listen with Convolver bypassed. Check it out:

Next, I reduced the overall gain and removed the dry signal from Convolver. The wet knob is also at its maximum here, so the original pluck signal isn't being mixed in. Here's the same progression with Convolver activated:

With Fruity Convolver activated, the plucks sound drastically different. It seems as if the filtered noise has added a mechanical drone-like effect, while still maintaining some of the original tonality of the dry signal - thus the magic of convolution!

I also noticed that the dynamic range of the signal was much less consistent with Convolver activated. I suspect this is due to frequencies in the dry signal aligning by chance with the  harmonics in the impulse response - a bit of compression would solve this in a mix with different musical elements.

Next, I loaded up NI's Kontakt instrument called Analog Dreams and selected a nice pad swell preset called 'Offworld Swell'. I programmed a different set of chords into the Piano roll this time and also added a spectrum analyzer to compare things before and after convolution is applied. Here's what the pad sounds like without convolution: 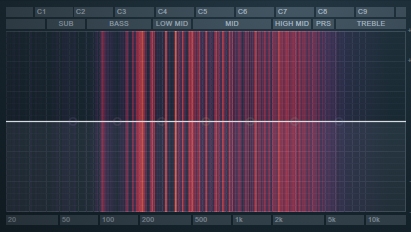 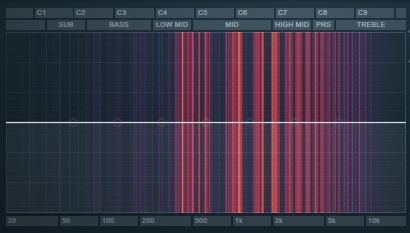 We're getting that same gritty, machine-like effect, and we can clearly see the harmonics introduced into the signal by the filtered impulse response. It looks like everything below roughly 400 Hz has also been filtered out, which is due to the octave I chose for the fundamental frequency while filtering out the harmonics.

So, we can begin to get an idea for how changing the impulse response sample might affect the results of experiments like the above!

As a final example, I decided to run some drums through my filtered impulse response. Here's a basic drum loop without convolution:

Next, I mixed the wet and dry signals, adding some delay to the wet signal and lowering the gain a bit. This added a nice spatial element to the loop. Again, frequencies below roughly 400 Hz were filtered out of the wet signal, which helped to reduce muddiness and excessive energy in the low-end.

Here's how this sounds:

After our experiments above, it's plain to see and hear that convolution used for applications other than reverb can create some unique and interesting effects. Also, we're not limited to just plucks, pads and drums either, this technique can be applied to any sound.

We can also experiment further by editing the filtered harmonics in our impulse response in various ways, to achieve different sounds and textures. Additionally, we can vary the total time of the impulse response and the shape of its volume envelope for different effects and results.

I hope this has inspired you to give some of my convolution methods a go in your music - happy sound designing!

Nick Madaffari is a hobbyist music producer and the owner of SynapticSound.com, an informational and educational resource for producers, musicians, and dance music enthusiasts. 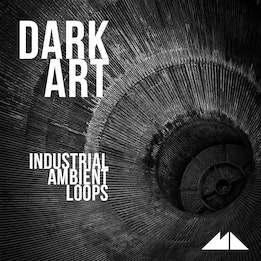 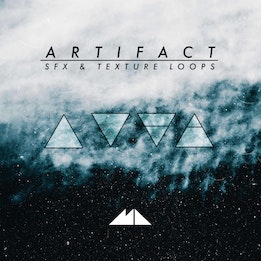 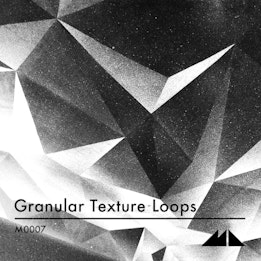