Home Magazine The Joy Of Sidechaining

The Joy Of Sidechaining

Sidechain signals are an incredibly useful and versatile part of the producer's toolkit. Most commonly employed to duck the level of synths and basses to make room for that thumping kick, they can in fact be routed into numerous plugins to control various effects parameters and controls. In this tutorial we're going to take a look at two incredibly effective techniques using sidechain signals - sidechain compression and sidechain filtering. We'll be using Logic to illustrate our discussion but most major DAWs feature native plugins with sidechain input options, just consult your manual for more information.

Chain On The Side

A sidechain signal is effectively a control signal, used to modulate some effect parameter dynamically. It's a little like an audio interface with both a guitar jack and MIDI input - the guitar's signal will be used as audio and actually heard; whereas the MIDI signal is used to control musical parameters such as pitch in a soft synth. Thinking in these terms also helps explain the name of this sort of signal, as your audio input is at the front of your device whereas the control input is typically located at the side or back.

Usually when sidechaining is mentioned, sidechain compression is what is being referred to. This is an incredibly popular and expressive technique, appearing in a multitude of tracks to the point of becoming pretty much ubiquitous in the dance music field. FlyLo's Tea Leaf Dancers from his Reset EP is a perfect example of this use of sidechaining - here the kick's signal is being used as a sidechain input to a compressor, which then ducks the amplitude of all the other elements in the mix according to the level of the kick signal. The effect is particularly pronounced in Tea Leaf Dancers, daringly used even to duck the vocal track.

In Logic it is incredibly easy to achieve this effect. Leave your kick on a separate channel and route all the elements you want to duck to a bus channel. Add a compressor to this bus channel, go up to sidechain input box in the top-right and select the channel your kick is on from the dropdown. 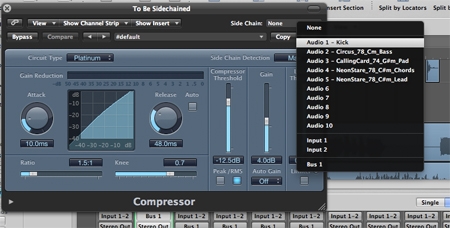 You will see that it is now the strength of the sidechain signal that controls how much compression is applied to the bus channel - play around with attack, release, threshold and ratio to experiment with fast, slow, soft and hard pumping effects.

It is always abundantly easy to spot whether a Logic native plugin can accept a sidechain input - just look in the same top-right corner and if the sidechain dropdown box is there, you're in luck. Other examples of such plugins include the Ringshifter, Fuzz-Wah, ES1, ES2 and Sculpture synths and the plugin we'll look at next; Logic's Autofilter.

A lesser known but equally effective sidechaining technique is sidechain filtering. Rather than modulating the compression applied to a track, this production trick modulates filter cutoff.

Using Logic's Autofilter plugin, apply the same sidechain input as in the previous compression example. Now, you'll notice that the strength of the kick controls not the volume ducking of the track but the cutoff frequency. This can produce expressive sweeping effects if you boost the resonance of the filter and experiment with different filter types (low, high and band pass are all options). Turn the modulation cutoff up to 100% and resonance to 0 for similar pumping effects to the compression technique. 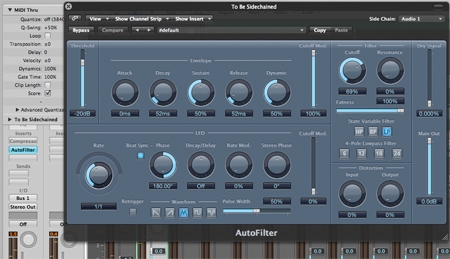 Sidechain signals are a great way of building connections and stronger relationships between the material in a track. They can add a cohesiveness to otherwise disparate material by making a track or an entire set of sounds rely on the behaviour of another track. Thus, they can be used as a gluing strategy or as interesting, expressive effects in their own right.

Check out more of our Production Tips articles here.

5 Tips For Warming Up Digital Sounds