Home Magazine Using A Loop To Get Your Beat Started

There is a pretty unlimited number of ways in which you can make use of loops in your music - from transposing them around the scale to chopping them up, layering them, reversing them, time-stretching them and blending them together with effects, right through to using them just as they come and much, much more.

I've explored many applications of the humble loop throughout the pages of this magazine but today I want to do something a little different - rather than explaining a particular technique or production tip in detail, I want to show you how useful a single loop can be in helping to get your beats started from scratch.

Of course, usage of loops in this way will be heavily dependant on source material and the type of beat you want to make, as well as your own specific production style, but my hope is that by taking you through the steps I typically follow as an initial creative burst, you just might pick up some ideas to help get you away from the dreaded 'empty project' (also know as writer's block) scenario!

Let's paint the scene - you've set aside some time for producing, have fired up your DAW and have created your first empty track when suddenly you realise something - you had no idea how to begin!

This is where a healthy loop collection can really pay dividends, as you can quickly dive into your library, audition lots of sounds very quickly and move forward based on pure gut instinct alone. And we all know how useful the gut can be in this type of situation!

For my demonstration, I'm going to have a quick listen through our most recent release, Askew - Hip Hop Loops, for something to get the creative juices flowing. The great thing about this exercise is that there are virtually no rules - it could be a bassline that helps us to kick things off, drum pattern, pad loop and so on.

Having listened through a few folders in the library, I've hit upon this warm pad synth loop called 'Solar_94_Dm_Chords' - here's how it sounds:

This is one of those loops that not only sounds good, it feels good too as I listen to it. My first task accomplished, I can now throw this loop into my DAW to begin building something around.

This sound is just what I'm looking for a number of reasons - as I said above, it sounds and feels good. More than this though, I can instantly begin to imagine lots of things happening around it.

After setting the loop to cycle and listening back a number of times, I've decided on building up quite a slow, loose, groove-led Hip Hop beat at 80 Bpm but before I get to the rhythmic side of things, I want to try something that I would recommend doing nearly every time you drag a loop into a project - creating unison copies both up and down the octave.

Why do I think this is a good suggestion' Because it can really help to flesh out a sound, with the lower octave contributing warmth and weight and the upper helping to define the texture and presence.

Of course, it isn't going to work every time but that's the name of the game - experimentation!

I just want to briefly point out that despite the loop's original Bpm of 96 being quite different from my project's tempo of 80, the quality is still there and everything is in time. This is the power of Acid WAV tempo markers, which many DAWs can read and all our loops come formatted with. This makes tempo shifting painless and easy! 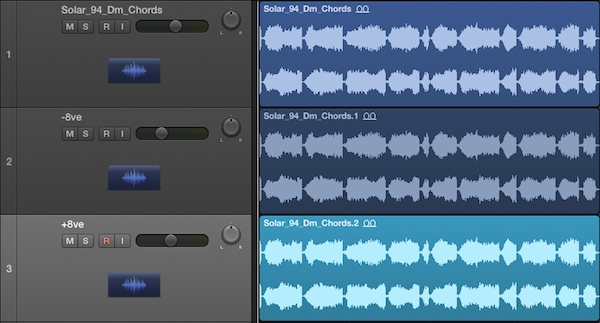 So, having duplicated my pad track twice and pitched one up by 12 semitones and the other down by 12, as well as some quick mixing for balance and adding reverb for blending, here's what we have:

Now I don't know about you but that really starts to take the sound somewhere for me! We've gone from a single loop to an entire sound-bed in about 30 seconds - onwards and upwards!

Bass At The Base

I could run straight on to putting my beat together, but just to mix things up I'm going to create my bassline next. I could use the bass loop that goes with this pad sound from Askew, but the point here is to create something new from a single loop as a starting point, so I've loaded up Logic Pro's Retro Synth and selected the Analog Funk patch to begin messing around with.

By using the cycle function again and my MIDI keyboard, I can jam out a bass riff really pretty quickly - the loop lists its key as Dm, which works nicely, but I've also found that a root note of G sounds great too - here's my riff, which includes both notes:

I've just improvised the rhythm as we don't yet have a beat but having already triggered a vague idea of what I want in my head from the original loop, I'm pretty sure this is going to work nicely!

Now we can crack on with the beat - loading up the 'MA Beats Kit' from our Beat - Drum Machine Samples pack within EXS24 gives me instant access to 16 Hip Hop-flavoured drum sounds, and some quick jamming later with the hats, snare, clap and rim sounds, results in this:

Now for the kick - I already know that I'm going to want to make use of some heavy sidechaining to make the kick really pop and give the rest of the beat that classic ducking effect, so I should really setup EXS24 as a multichannel instrument and send the kick out its own channel. 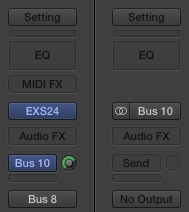 However, I'm being lazy here and want to press on, so I've just made a copy of the EXS24 instrument which I'll program my kick on, sending this entire track out to a bus channel to use as a sidechain source.

Again, just because I'm doing things in a quick and approximate manner, I'll just send all other audio channels through to a second bus channel, which I'll then place a compressor on to be sidechained by the kick.

I need to make sure the sidechain bus channel is routed to no output also, otherwise I'll hear a doubly loud kick in my beat - having done this and jammed around with a few different patterns for the kick, here's what I've settled on:

Things are really starting to move in a nice direction now, and all inspired by that initial process of searching for and finding a loop to work with!

I don't want to do too much more as I'm sure you've got the picture by now, by I've thrown in a few of the accompanying loops to the pad sound from Askew, including the synth lead and a noise loop to give me a lead melody atop the beat that sounds like this:

Of course, I could load up another synth and create a fresh one - the sky's the limit from here onwards!

There you have it, a lazy, low-slung Hip Hop beat in the loose style of the LA Beat Scene, conjured up in just a few minutes thanks to the adaptable sound of the initial loop. I hope you've seen how useful loops can be in helping to get your tracks up and running, giving you another weapon in the fight against that terrifyingly empty project - start your search for the right sound and get creative! 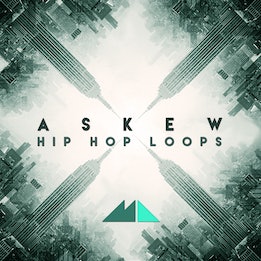 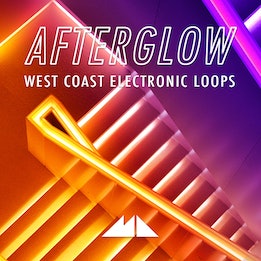 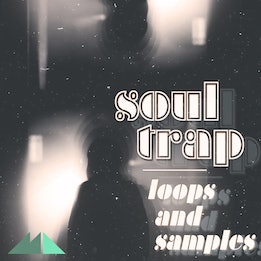