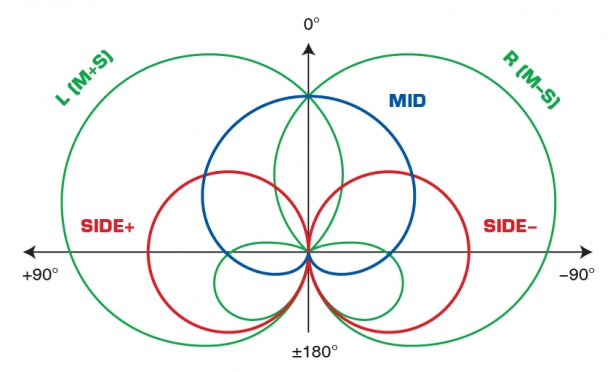 Did you know that you don't have to think about stereo audio in terms of left and right' There is another way of working in stereo that gives you access to many of the mixing engineer's secrets, as well as some possibilities for trippier processing: Mid/Side stereo.

Mid/Side stereo uses a bit of trickery with the polarity of an audio signal to use the two channels as middle and sides, rather than left and right. This means that you can have processing applying only to the centre of the stereo field, for instance. Simply changing the relative levels of the two tracks is a classic way to alter stereo width. 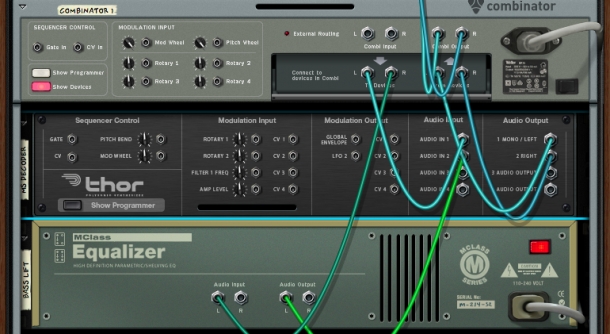 Although there are a few free plugins which can encode L/R to M/S (such as Voxengo's MSED), you can do the process using just your DAW's tracks easily enough. First, you need to have the left and right channels of your audio as two separate mono tracks. Pan the 'left' channel to the centre. Next, duplicate the 'right' channel, pan the original hard left and the duplicate hard right. Now flip the polarity of the copy, which is sometimes called 'inversion'. You've just implemented some maths: M = (L + R), S = (L - R).

It's a good idea to group the two mono channels making up the Side track together (or drop them onto a new stereo track). The Mid and the Side can now be controlled and processed independently.

Aside from allowing you to sit stereo audio cleanly within the stereo field, you can alter how the timbres of sounds themselves are presented by EQ-ing the Mid and Side differently. For instance, you can high-pass filter the Side track to make the bass frequencies of a synth sit solidly in the centre whilst keeping the stereo wide open. You could also dip the Mid's EQ to make space for a vocal.

But Mid/Side processing also has more esoteric applications. One of my favourites is to change the front-back placement of the Side track, sending it further away from the listener by cutting the highs, lowering the level a little and adding a touch of reverb. This gives the impression of the Mid being closer than the Side, which really adds depth and shape.

Applying modulation effects such as chorus or flanging to just the Mid or Side is a great way to stop the effects becoming too distracting, whilst keeping all of their impact - it means that you can use more of the effect before it sounds like too much.

However, perhaps the most interesting effect to use separately is pitch shifting. Shifting the Side up a perfect 5th, for example, lets you colour harmonies subtly and evocatively without losing the power of the part.

Try out M/S processing, and see how you have so much more space to play with!

Check out our complete range of SFX, texture and ambient sounds to get your Mid/Side experiments off the ground.